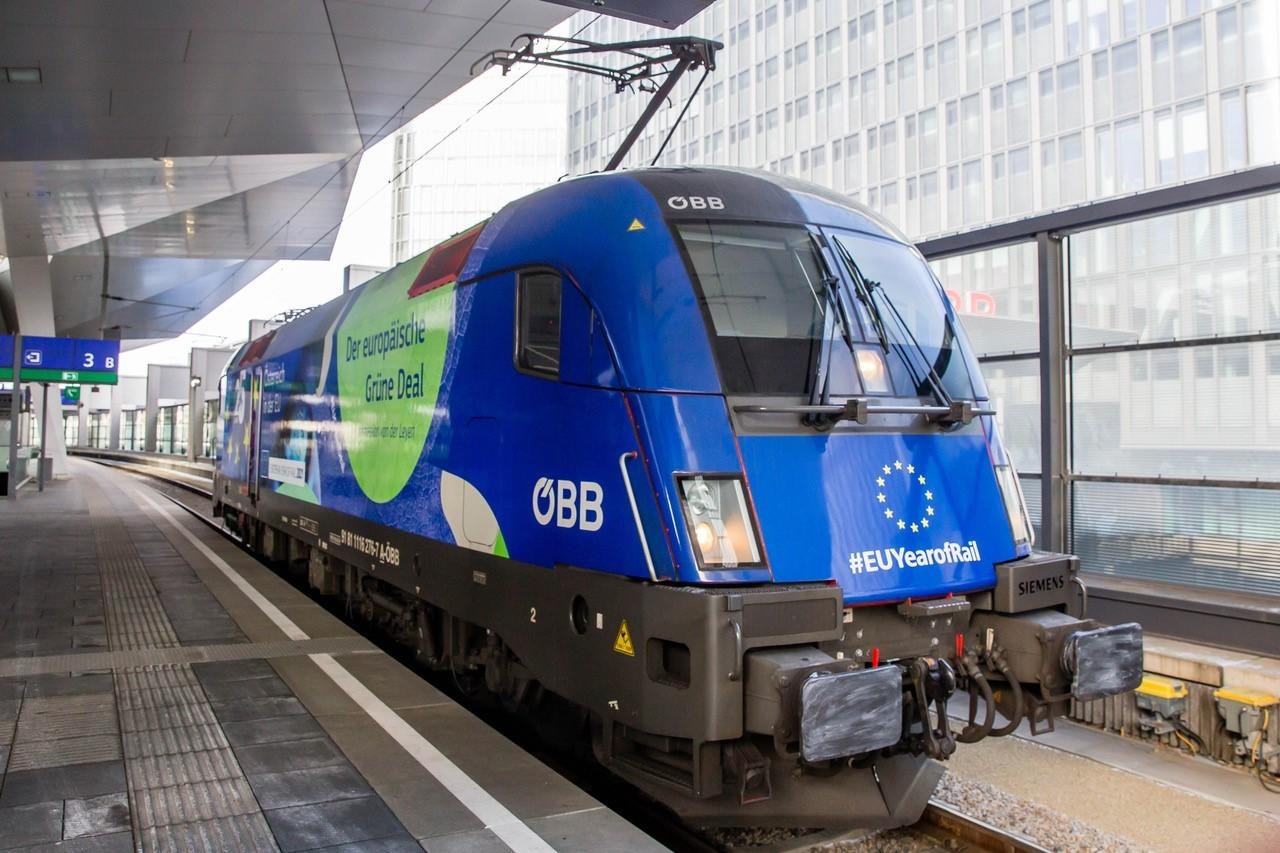 Austrian operator ÖBB has given one of their locomotives a special European Year of Rail design. The locomotive was presented at a ceremony at Vienna central station last week, and will be on the tracks in Austria and neighbouring countries as a sign of European sustainable mobility by rail. “The EU needs more railways so that we can achieve the climate goals, but the railways also need more Europe in order to become faster, more digital and more efficient in the future”, said ÖBB CEO Andreas Matthä.

At the start, the new design of the locomotive was inaugurated by Climate Protection Minister Leonore Gewessler, Martin Selmayr, Ambassador of the European Commission in Austria, and ÖBB CEO Andreas Matthä. Immediately after the christening, the EU locomotive with around 10,000 horsepower goes into service, runs on the tracks as ambassador for the European Year of the Rails in Austria and the neighbouring countries.

The European Year of Rails is in line with the EU’s efforts to promote environmentally friendly modes of transport and to become climate neutral by 2050 with the European Green Deal. A recent monitoring study by the Commission shows that the market share of rail compared to other land passenger transport has remained stuck at around 7.8 percent between 2015 and 2018. Despite a slight annual growth of 2.5 percent in passenger transport by rail, there is no sign of a modal shift towards rail, in passenger nor freight transport, so efforts need to be made to make this happen.

“Transport is our problem child in climate protection”, said Austrian Climate Protection Minister Leonore Gewessler. “That is why we are investing so much money today in expanding the rail infrastructure in Austria than ever before. The fight against the climate crisis also requires strong partners such as ÖBB and the tailwind of the entire EU. I am particularly pleased that the new EU locomotive is now on the tracks all over Austria under the sign of the European Year of Rail and is carrying this message for climate-friendly mobility to the outside world.”

ÖBB CEO Andreas Matthä: “The European Year of the Rails is an important sign of a climate-friendly Europe – because we are faced with the big question of how we can make transport in Europe more environmentally friendly in the future. And there can only be one answer to that: by train! The EU needs more railways so that we can achieve the climate goals, but the railways also need more Europe in order to become faster, more digital and more efficient in the future. Driving a train through Europe has to be as easy as driving a truck.”

“The European Year of the Rails comes at exactly the right time”, said Martin Selmayr, Ambassador of the European Commission in Austria. “Rail links states with one another, our EU locomotive therefore also stands for cohesion in Europe. And in view of the corona pandemic, we need that more than ever. The EU locomotive symbolically shows that we are ready to start bringing trains into the vision of a strong, ecological and cosmopolitan continent.”