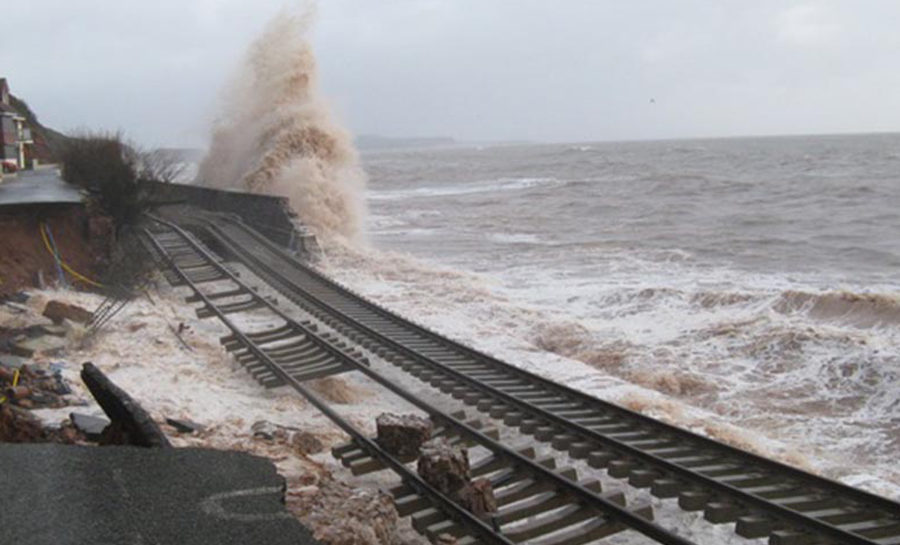 In its third Adaptation Report, Network Rail outlines the progress made from 2016 to 2021 to make the network more resilient to extreme weather conditions caused by climate change. According to the infrastructure manager, it is for the first time, the advanced work being carried out across Network Rail is brought together in one report.

Improving the rail’s resilience will come at ‘significant cost and will take many years to achieve’. “We’ve already seen the devastating impact that climate change can have on the railways, and we know that it will only get worse in the coming years, so we must continue to do all we can to better understand the risks and impact it can have on our infrastructure”, says Andrew Haines, Chief Executive of Network Rail.

The impact of climate change has been increasingly evident in recent years, with the railway experiencing more frequent and severe extreme weather events, the report said.

Weather trends point towards an increased frequency of extremely dry periods followed by prolonged and extreme wet weather in the coming years. These factors accelerate deterioration of earthworks and put pressure on drainage systems and other rail infrastructure, increasing the likelihood of critical coping thresholds being exceeded, the report said. Network Rail has established a weather risk taskforce to gather data to improve future response to extreme weather events.

Impacts on rail traffic include landslides as well as an increased frequency of storms. These can cause trees to fall on the tracks, bringing train traffic to a standstill.

An examples of an incident caused by weather is the Stonehaven derailment in 2020, caused by a landslip, where three people lost their lives. In July 2020, flash flooding at London Euston station with a fire in a substation as result caused a loss of power and large traffic disruptions. One of the busiest stretches of Scotland’s Railway between Edinburgh and Glasgow was closed for five and a half weeks in the same year following severe rain which washed away parts of track.

The report adds that while not all incidents are correctly attributed to weather conditions, the figures used are likely to be conservative estimates. The actual costs may therefore be much higher.

“As the greenest form of large-scale transport, its critical we can continue delivering low carbon travel to customers”, said Haines. “While there is no silver bullet to making our railway more resilient to the effect of climate change, the action plan outlined in this report demonstrates the progress we are committed to making.”

A number of measures have already been taken, for example on the basis of digital technology. For example, sensors have been installed in critical areas where landslides can occur. In addition, accurate photography of the railway lines using cameras makes it possible to identify, for example, trees that could cause problems immediately or later. This makes it possible to anticipate the fall of trees on the tracks.

Compared with previous investment periods, there were a greater number of resilience actions in the last period and there is good progress towards improving the embedding of climate change into the next control period, says Network rail. However, “we understand there is still much to do and we require continued action on understanding our risks, building our adaptative capacity and investing in current and future levels of resilience”, says the report.

Particular focus will continue to be through the delivery of strategies and investment in asset management processes at both national and regional levels, enhancement of standards and climate guidance, and continued knowledge generation. Network Rail is committed to achieving the United Nations’ goal of helping to limit global warming to 1.5°C. By the end of 2021, half of its suppliers were trying to reduce their carbon footprint.

David Quincey, Climate Change Adaptation Manager at Network Rail, will give a presentation on this topic on 22 June at the international conference RailTech Europe in Utrecht. View the full programme here.