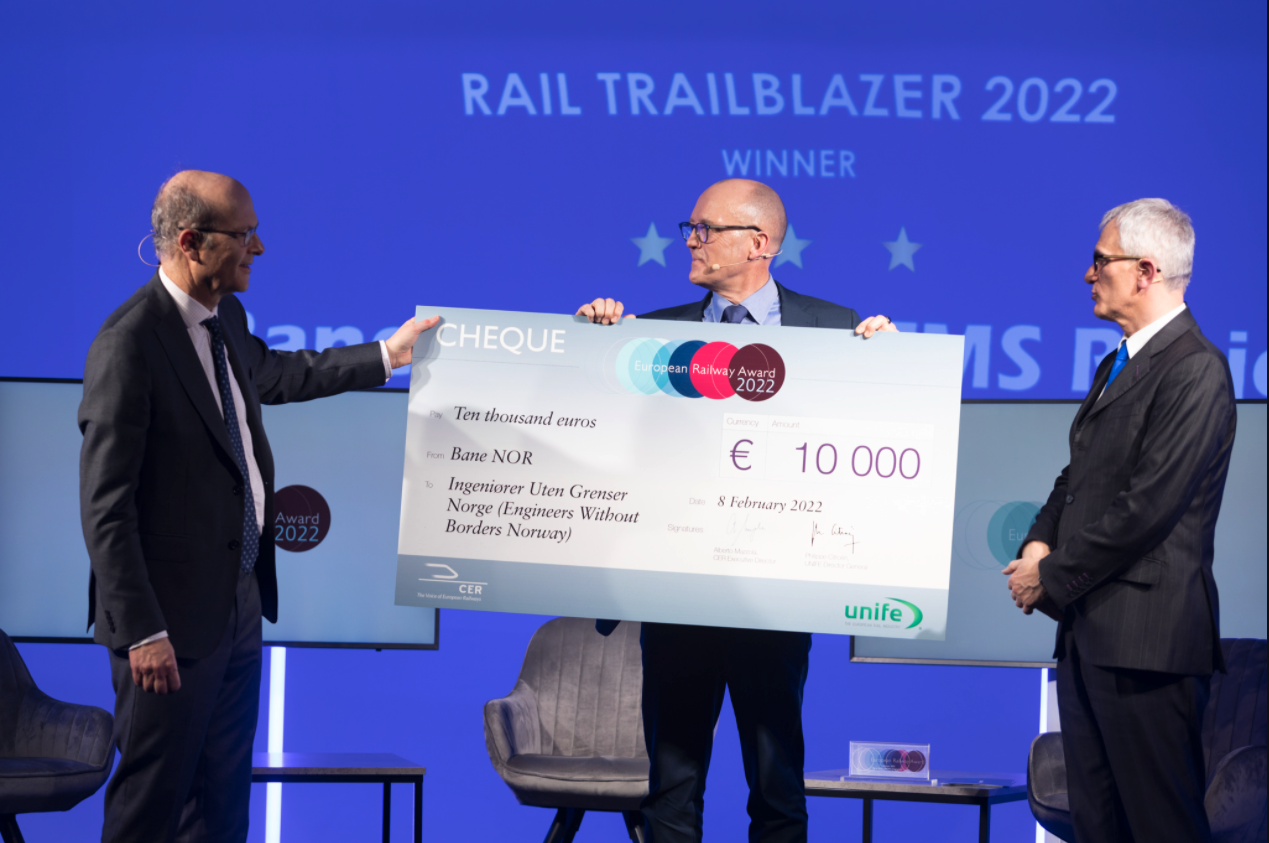 Bane NOR has been named a winner of the European Railway Award 2022 for the work on the new digital signaling system ERTMS, which the have planend to roll out on the whole railway network. Manfred Weber, Chairman of the European Parliament’s EPP Group, also won an award, for his legislative support of rail travel among youth.

The 2022 ceremony of the European Railway Award, hosted by rail industry associations CER and UNIFE saw several new additions. The “Rail Trailblazer” Award for technical excellence and innovation was awarded to the Norwegian infrastructure manager BaneNOR. They have planned to roll out the European Rail Traffic Management System (ERTMS) the entire Norwegian railway, over 4000 kilometres of railway and over 330 stations.

Bane NOR will start the introduction of ERTMS on certain sections in 2022, and will have completed ERTMS throughout the country by 2034. Bane NOR has a contract with three suppliers. Siemens is delivering the new signaling system, Alstom is rebuilding the trains, and Thales is delivering the new traffic management system. Bane NOR has already launched an ERTMS pilot line and a training and simulation centre. Workforce training is an important aspect of the project as an estimated 6,000 people will require ERTMS training to fully make use of the technology.

Finland is planning the same nationwide solution as Norway, but will not start until 2028. Other countries in Europe such as Denmark, Sweden, Germany and Austria are building regional digital signaling systems, and not a single system for the whole country. Norway is installing ERTMS Level 2, meaning all data communication between the signaling system and the trains takes place via digital GSM-R radio. The communication takes place between a radio block center and the trains’ ETCS computer.

‘Paving the way in Europe’

Sverre Kjenne, Executive Vice President of Operations and Technology at Bane NOR is happy that it gets noticed that Norway is the first to build a common signaling system for the whole country. “The award shows that we are paving the way in Europe and that the investment has significance beyond our own borders.”

The price includes 10,000 euros (around 100,000 Norwegian kroner) which are to be donated to a charity. Bane NOR has chosen to donate the money to Engineers Without Borders , a non-profit organisation that contributes with engineering expertise and the use of technology in development work. The winner was selected by a jury of policy makers and sector experts.

The “Rail Champion” Award for outstanding political contributions to the advancement of rail transport was awarded to Manfred Weber, Chairman of the European Parliament’s EPP Group. This award was bestowed as an honorary recognition by CER and UNIFE.

He notably provided pivotal support to the DiscoverEU scheme, which has allowed thousands of young Europeans to travel through and engage with their neighboring EU countries in a sustainable way. Weber’s achievements find particular resonance at this moment as Europe concludes the European Year of Rail and commences the European Year of Youth.

At the ceremony, Weber said: “Rail travel is an essential part of our daily lives. Not only that, it can also be a life-changing experience to discover the beauty and diversity of Europe from a train. That is why I am so proud that we greatly increased the access to interrail for young people in Europe.”

ERTMS is on of the topics of the conference RailTech Europe 2022. The first day (June 21) is all about The Digital Railway. For more information and speakers, visit the website.